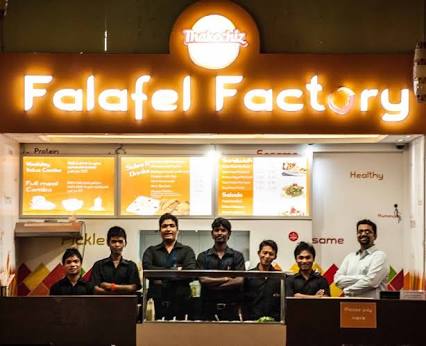 Falafel is a deep-fried ball, doughnut or patty made from ground chickpeas, fava beans or both. Falafel is a traditional Middle-Eastern, commonly served in a pita, which acts as a pocket, or is wrapped in a flatbread known as taboon.

The Falafel Factory is a startup that focuses on the middle-eastern cuisine. On the go exotic food is rare to find in India. Times are changing and so are people’s taste. Travelling has increased globally with the working class making trips for short term assignments from work.  Rising incomes, combined with dual income households, are leading people to experiment more and more. They yearn for variety and hence, want to try out new and exotic cuisines.
The two co-founders, Chirag and Akanksha graduated from IIT Kharagpur in 2011. After a minor stint for 2 years at Goldman Sachs, Chirag left his job to follow his dream. He was soon joined by Akanksha who left her job at Barclays capital, Singapore to do something new. Since the start of their careers, the duo were keen on doing something more than a routine job, creating something of their own, contributing something more to the society. Like every other first time entrepreneurs coming from the MNC background, the founders faced a lot of difficulties getting some of the ground work done including licenses for the outlets. Following their commencement, they faced some difficulties while setting up the incentive system for their blue collared staff. With time and experience, they picked up this skill as well.

“We pride ourselves on being able to serve our customers with the most delicious and authentic falafels and pita pockets in the town”, say Chirag and Akanksha, “At present, at Falafel Factory we serve more than 100 customers a day and this number has been rising steadily”, they added.

With their aim to bring Middle Eastern street food to people, the brand plans to operate as a hub and spoke about a QSR (Quick Service Restaurant) model to offer the product at an affordable price point. Since such cuisines are usually found only in fine dining restaurants, there is a dearth of on the go and value for money options in this space. The fact that falafels are vegetarian is a bonus for a country with a huge vegetarian population. The brand has also launched home delivery service to cater to the huge crowd of tech savvy people who prefer ordering food online.

The first store was opened up on 9th December, 2013 in ITPL, Bangalore. In July, 2014 they launched the home delivery service and on January 26th, 2015, its second brick and mortar store launched. Currently they also have outlets in Koramangala, Mahadevapura and Kammanahalli in the IT capital of the country.
The brand has expanded the business to online home deliveries to cater to more number of people.
The brand aspires to be the best in the city for Middle Eastern cuisine and is devoting all efforts towards opening multiple stores in Bangalore itself. There are plans to expand to Delhi, Mumbai and Pune. Their long term vision is to be synonymous with middle-eastern food in India.

As India is a developing country, the palates of her people are also developing and looking for something global.

We can now expect a delicious Middle-Eastern meal right at our doorstep, thanks to Falafel Factory. With new food tech/aggregator startups like Falafel Factory, we can surely look forward to Bangalore or Delhi being the next New York or Paris, offering a plethora of cuisines for the citizens.

Neha Mishra - July 31, 2018
0
Introduction Using its in-house platform, they help users discover the most relevant fashion that suits their body, lifestyle, personality and within their budget. Voonik strives...